Formaldehyde is a gas that is sometimes found in emissions from particle board or from other products made from formaldehyde such as urea-formaldehyde or phenol-formaldehyde polymers. It has been reported [1] that some consumer products used to straighten or treat human hair may contain or release formaldehyde during use. Formaldehyde has a penetrating, irritating odor. It is highly reactive and readily polymerizes to form a trimer (trioxymethylene) or the solid, paraformaldehyde. Formaldehyde is often marketed as a 37% (by weight) water solution called formalin. It is usually stabilized by the addition of 8-10% methanol. Formaldehyde is a confirmed carcinogen and workers’ exposure is regulated by OSHA. The eight-hour TWA exposure should not exceed 0.75ppm and the 15-minute short-term exposure limit (STEL) has been set at 2ppm.

The purpose of this experiment was to demonstrate the effectiveness of the Sentry Air Systems Model 300 Winged Sentry™ with Lid (WSL) in collecting and removing formaldehyde gas produced by the evaporation of a measured amount of liquid formalin. The Model 300 WSL was equipped with an activated charcoal filter specially treated for the removal of aldehydes for one test and a standard activated charcoal filter for another test. There are two WSL models available (Model SS-200 WSL and Model SS-300 WSL); the latter was used in this project. 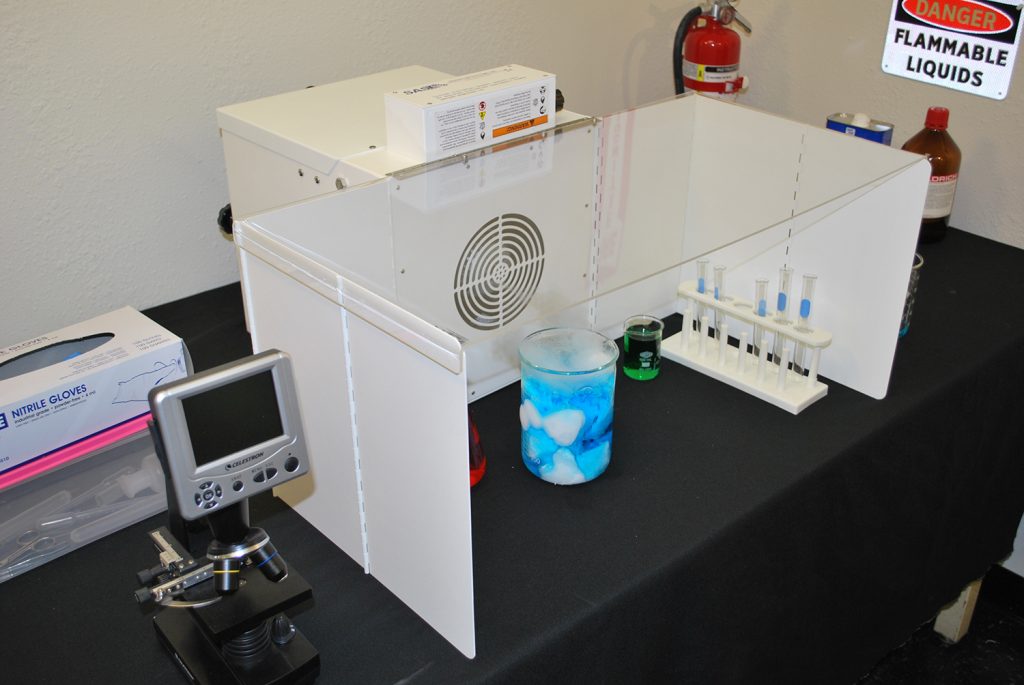 Formaldehyde is best captured near its source and the Model 300 WSL is very efficient in capturing and removing formaldehyde before it mixes with the surrounding workplace air. Formaldehyde that escapes into the room air can be a health concern for personnel since it has poor warning properties and air concentrations could exceed the recommended limit before its odor is detected. For purposes of this experiment, a measured amount of liquid formalin was distributed drop-wise from a burette into several cotton balls placed in a shallow pan. The cotton provided a large surface area to facilitate the evaporation of the formaldehyde solution. When the Model 300 WSL was turned on, a stream of air was drawn across the cotton balls and into the Sentry fume extractor.

On April 8, 2011, an activated carbon filter treated for the removal of aldehydes was prepared and installed in the Model 300 WSL. The airflow rate with this specific filter was measured to be approximately 250 CFM (cubic feet per minute). 4.0 ml of formalin (containing 1.48 grams of formaldehyde) was dispensed from a 50-ml burette and evaporated into the air stream over a 30-minute period. Air samples were collected during the experiment using SKC 226-119 sorbent tubes and battery-powered sampling pumps. The pumps were set to pull about 100 cc/min. and were pre- and post-calibrated. All personnel involved in the sampling project wore half-face, air-purifying respirators equipped with an organic vapor cartridge while formalin was being handled. The operator also wore eye protection. Samples were taken at the inlet and outlet of the Model 300 WSL. 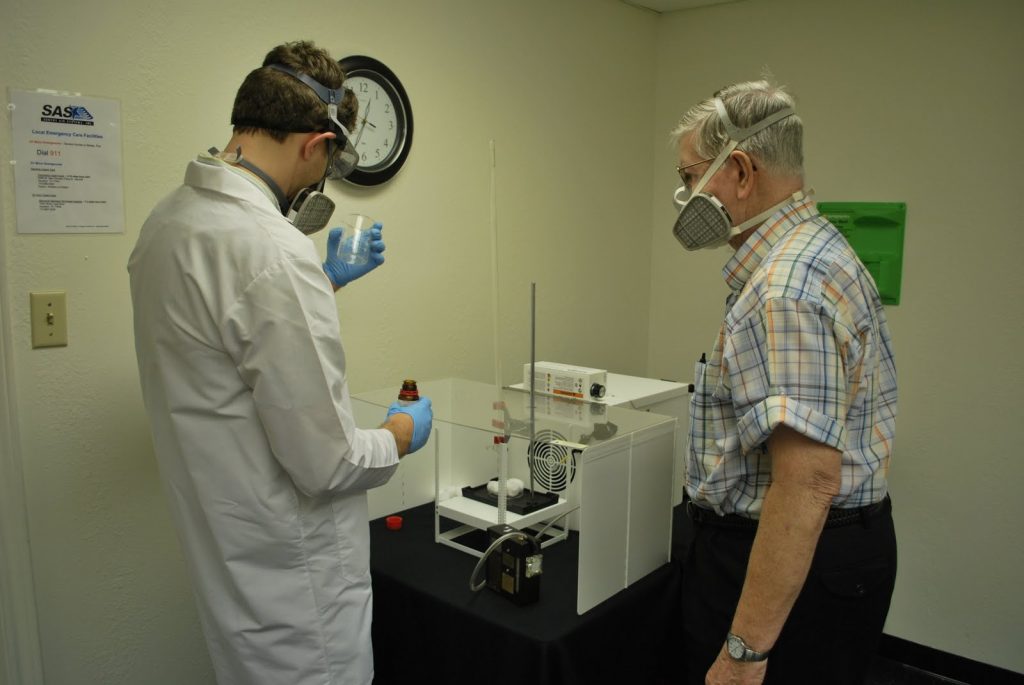 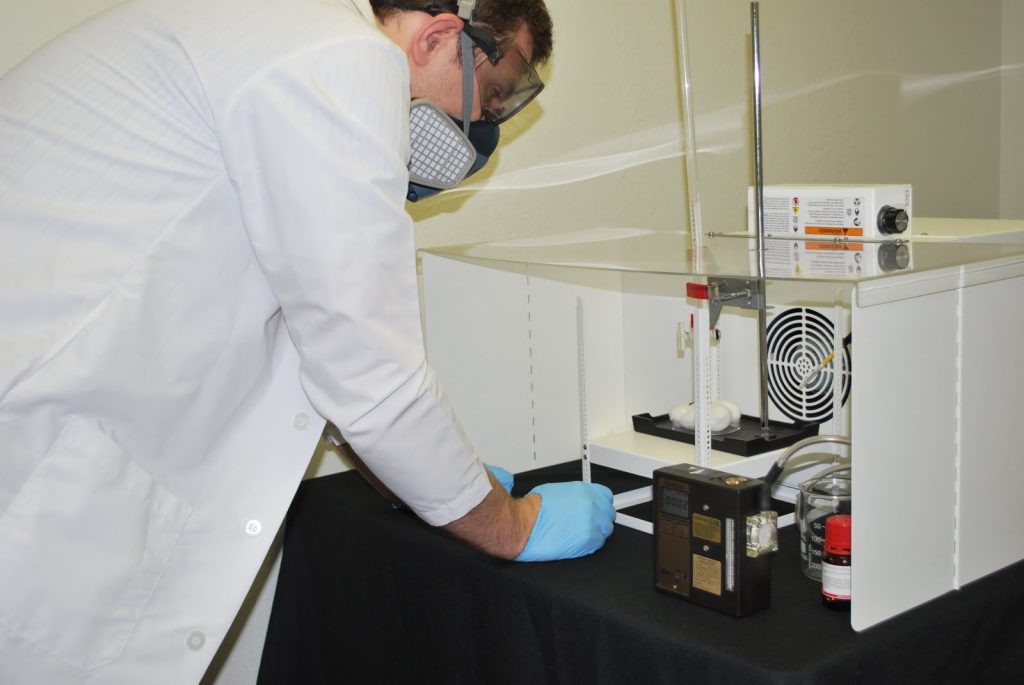 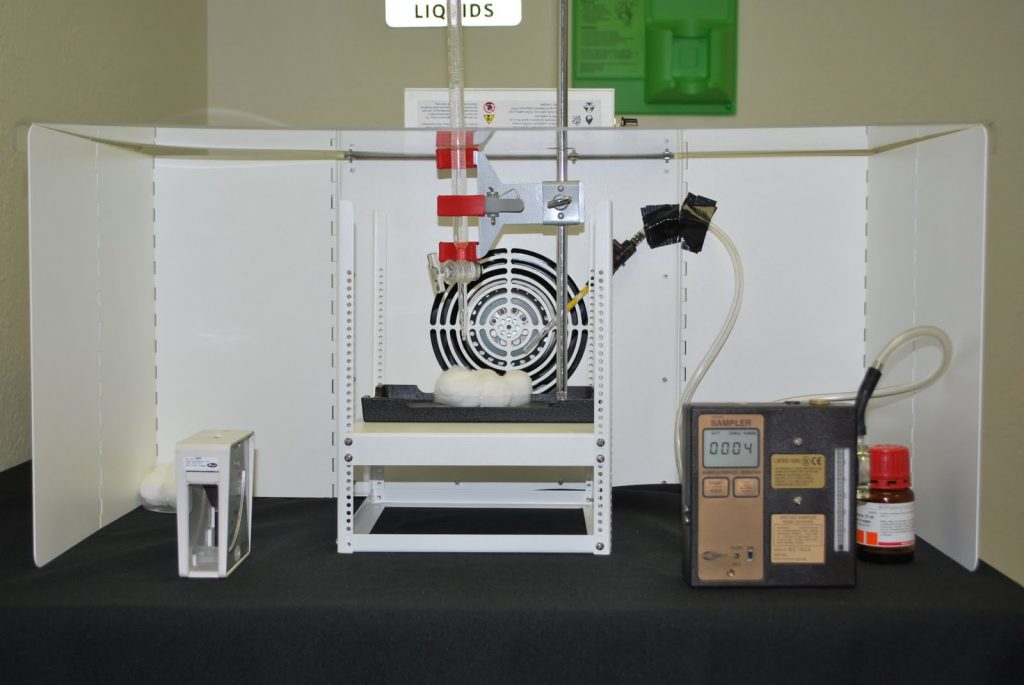 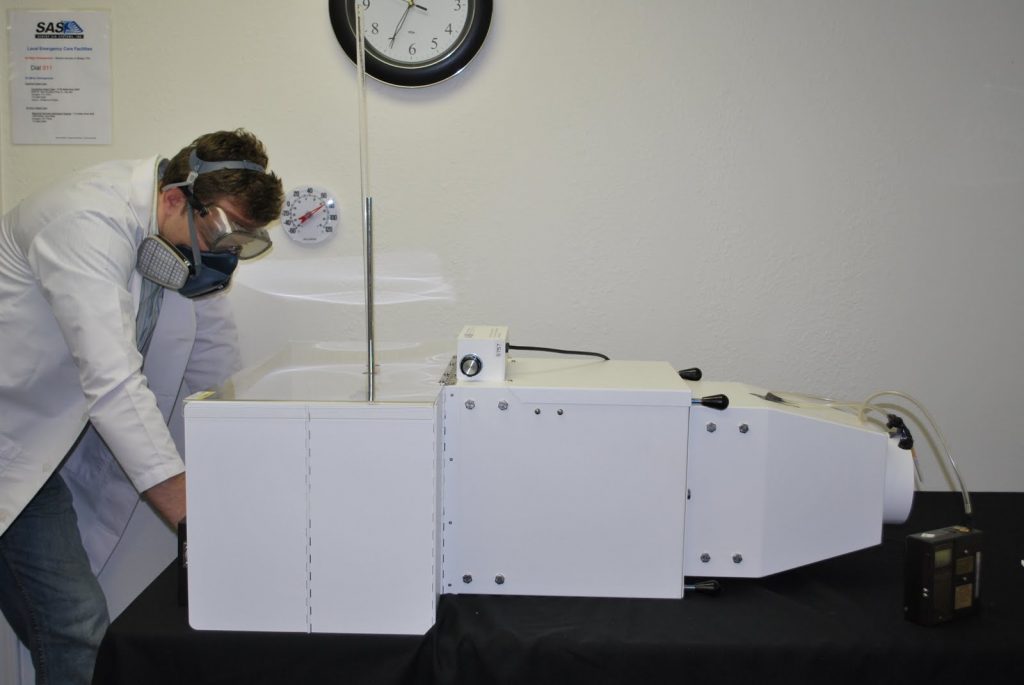 Side View of SS-300-WSL during Testing 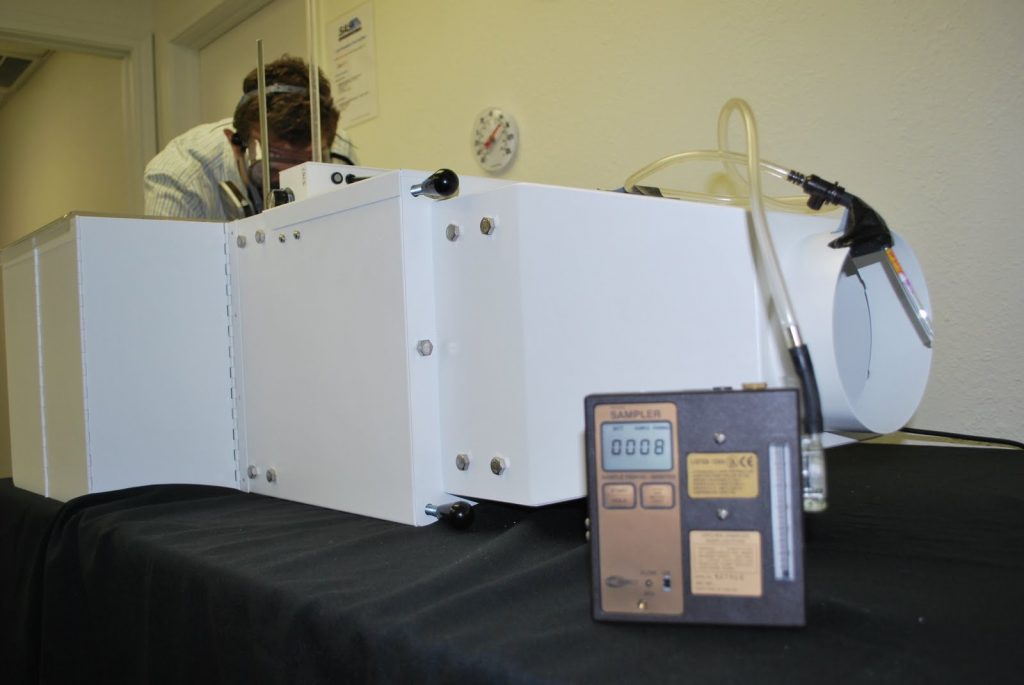 A second test was performed using a standard activated charcoal filter. The airflow was measured to be approximately 187.5 CFM. The experiment was set up using the same parameters as outlined above. All samples, including a blank, were sent to an AIHA-certified laboratory for analysis using HPLC and UV detection (NIOSH Method 2016).

Accordingly, on April 27, 2011, this third test was performed using an activated charcoal filter that was specially treated for the removal of aldehydes. This time, 2.5 ml of formalin was evaporated into the air stream over a 20-minute period. Air samples were collected at the inlet and outlet of the machine using a sampling rate of about 150cc/min. In addition, an area sample was taken of the room air, placed approximately six feet away from the operation.

The sampling results are presented in the following tables:

2. The concentration of formaldehyde in the ambient air was maintained below its detection limits. The Model 300-WSL provided excellent protection throughout the experiment(s). Potential exposures, without regard to the use of a respirator, were found to be well below OSHA workplace limits (PEL) for formaldehyde.

NOTE: An MSDS (Material Safety Data Sheet) for formalin as used in this project can be found at: http://avogadro.chem.iastate.edu/MSDS/formaldehyde.htm

For a PDF version of this report, click here.

For information on other formaldhyde fume extraction products, visit our website.