An Efficiency Comparison of a Specialty Formaldehyde Filter and Activated Carbon

Formaldehyde is a small, organic, chemical compound. It is the simplest of aldehydes and has the formula CH2O. It often exists in an aqueous solution and is called formalin in this form. It is widely used as the starting compound for other complex compounds and materials including many resins. Formalin itself is used as a disinfectant because it kills most bacteria and fungi. It is also used medicinally as a skin-drying agent. Formaldehyde is used prevalently in histology and microscopy as a preservative or fixative for tissues and cells. It is used as in embalming to preserve human or animal remains. There is a widespread concern, however, about the use of formaldehyde because its vapors are toxic and carcinogenic and can cause health problems at extremely low concentrations in air (as little as 0.1 ppm). An extended exposure can lead to more serious health problems including cancer. Consequently, adequate controls must be used to prevent both short term and prolonged exposure to formaldehyde.

The objective of this test is to determine and compare the filtering efficiency between a Sentry Air Systems carbon filter cartridge and a Sentry Air Systems specially formulated formaldehyde filter (impregnated activated carbon) on formaldehyde vapors within a Sentry Air hood. An environment will be created that exceeds the OSHA Short Term Exposure Limit (STEL). Three separate tests will be run. A concentrated solution of formaldehyde will be used for each test. To determine the absorption ability of each filter on formaldehyde, the concentration of formaldehyde will be sampled at various locations in the lab. The samples will be obtained using sorbent tubes in air sampling pumps. The tubes will then be sent to the independent HIH laboratory for analysis.

2) Next, set up a SS-340-DCH with a 10 lb Activated Carbon filter. The 300 series unit with carbon filter generates approximately 200 CFM at full speed and the air velocity is greater than 100 FPM. 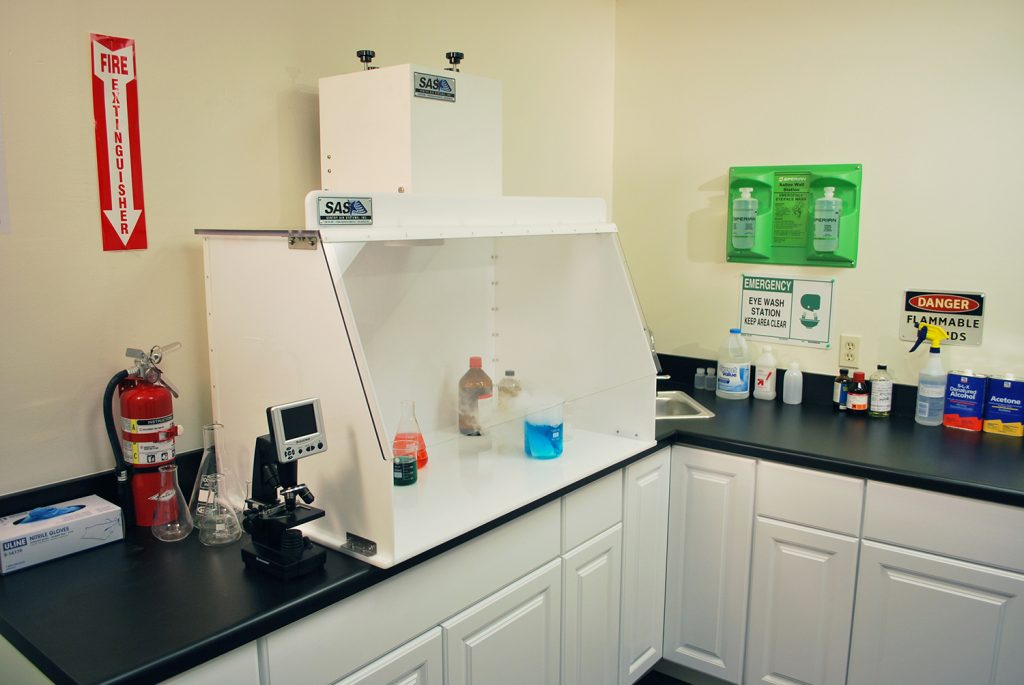 4) The pumps located at the edge of the filter and the ambient air count will adsorb at 200 ml/min.

6) Allow the room to air out completely before starting the next part of the experiment because this will affect the concentration of the next test.

7) Switch the filter combination in the hood by replacing the activated carbon with a formaldehyde carbon. Repeat the experiment as described above. Label the tubes and refrigerate.

The sorbent tubes were analyzed by HIH Laboratory and the results were reported in the following tables:

The results from the independent lab show that the formaldehyde vapors were removed from the airstream by both filters with greater than 99% efficiency. However, the results did not give an indication as to which filter, the activated carbon filter or the formaldehyde carbon filter, is more efficient for formaldehyde fumes. Had the test been significantly extended, it is likely that the operator would have been exposed to much greater than 0.08 ppm of formaldehyde fumes, whereas, the hood and filter would have prevented this exposure. Under the conditions present on the date of this test, the Sentry Air Systems ductless hood created a NIOSH compliant working environment for the operator and eliminated 99% of formaldehyde vapors from the airstream.

For a PDF version of this industrial hygiene report, click here.