Fentanyl, a potent synthesized opioid analgesic, is used as an anesthetic and in the management of chronic and breakthrough pain. It is currently the anesthetic of choice for those undergoing surgery.

In the mid 70s, drug abusers sometimes used fentanyl as a recreation drug as its effects are similar to heroin. Its effects are very short acting and quickly becomes addictive to users who want to maintain their high. It comes in various forms; powder, blotter paper, tablets and spray. Fentanyl lollipops are sold as Perc-O-Pop on the streets. To date, twelve fentanyl analogues (a chemical compound having a structure similar to that of another but differing from it in respect of a certain component) that have been developed for street use have been identified by drug traffic teams.

The recent legalization of marijuana in many U.S. states has the Mexican drug cartels scrambling for an alternative high profit illegal drug and they turned to the clandestine manufacturing of fentanyl, using it as the cutting agent in heroin and selling it as heroin – 40 – 50 times more potent than street level heroin. Overseas labs in China are mass producing fentanyl and its analogues and marketing them to drug trafficking groups in Mexico, Canada and the United States. This has led to an unprecedented outbreak of thousands of overdoses and deaths. The dosage of fentanyl is a microgram or one millionth of a gram, similar to a few grains of salt.

Fentanyl is not only dangerous for the drug’s users, but for law enforcement, public health workers and first responders who could unknowingly come into contact with its different forms. Just touching fentanyl or accidentally inhaling the substance during enforcement activity or field testing can result in absorption through the skin, and that is one of the biggest dangers with fentanyl. The Drug Enforcement Agency recently released a nationwide alert along with Police Roll Call video to warn law enforcement about this danger. The onset of adverse health effects, such as disorientation, coughing, sedation, respiratory distress or cardiac arrest is very rapid and profound, usually occurring within minutes of exposure.

Law enforcement officers should be aware that fentanyl and its compounds resemble powdered cocaine or heroin an be treated as such.

Sentry Air Systems provides ductless hoods for fentanyl and other drug crime analysis for law enforcement agencies to process and analyze the samples under a ductless containment hood. These negative pressure hoods draw the fentanyl laden air into the filtration chamber. This enables the crime analysis team to protect themselves against unwanted airborne fentanyl particulate from entering the lab and workspace. 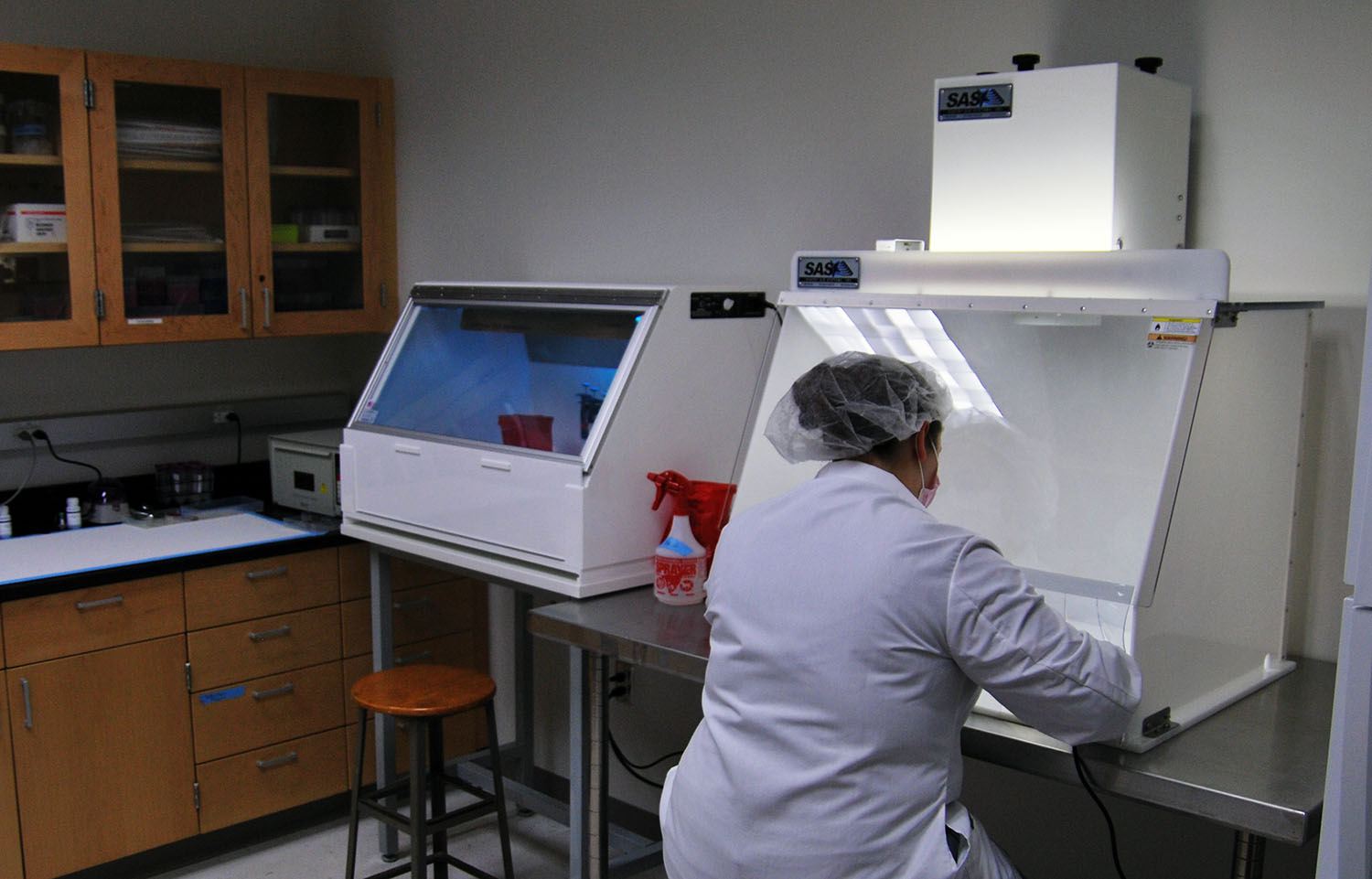 The 40” Wide Ductless Fume Hood combines powerful air flow with a sturdy and compact enclosure for optimal respiratory and environmentalprotection. This fume hood is designed to pull harmful particulate up and away from the operator’s breathing zone and into the filter chamber. Depending on the application, this chamber houses either HEPA filtration [up to 99.97% efficient on particles 0.3 microns and larger], ULPA filtration [Up to 99.9995% efficient on particles 0.12 microns and larger], Activated Carbon, or specialty-blended filter media [i.e. Acid Gas, Mercury, Aldehyde, Ammonia]. Variable Speed Control and a Fluorescent Light come standard with this unit.
Typical uses for this fume hood include crime analysis, chemical fume control, pharmaceutical compounding containment, light dust removal, biological applications, solvent or epoxy use, and many more applications that require the removal of fumes and particulate.

The 40” Ductless Fume Hood provides a portable, energy efficient, and economical solution for many commercial, medical, laboratory and industrial applications that require a containment hood. For additional visibility, a transparent version is available at extra cost.

For more information about controlling hazardous fumes for small and large weapons cleaning, contact Sentry Air and speak with one of our applications specialists. Call 800.799.4609, email sales@sentryair.com, or visit our website.