Welding Fume Extractors are designed to be utilized as an engineering safety control to protect users from the occupational hazards presented with various welding applications. Given that the vast majority of the respirable particles in the airstream are under .4 microns in size, a filtered ventilation system that can filter down to that level is what is required to ensure the safety and health of the welder. These health effects carry short and long term implications.

When choosing an adequate ventilation system, it is important to make sure that you are aware of all of the elements that could vary the efficiency of the filtration of welding fumes. The particular welding application is usually the number one variable that helps decipher what is recommended, but additional configurations such as HEPA or ASHRAE filters, cleanable media, multi-operators, or portability are dependent of different elements that are best discussed with a trained specialist. 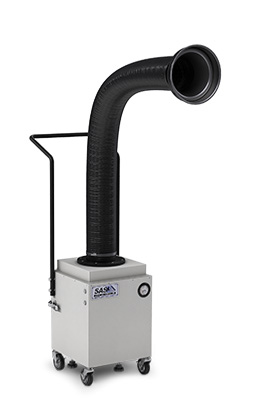 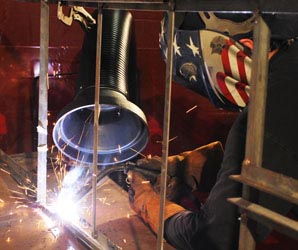 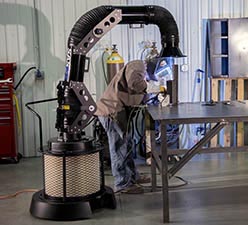 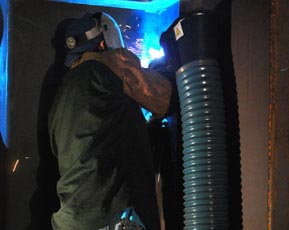 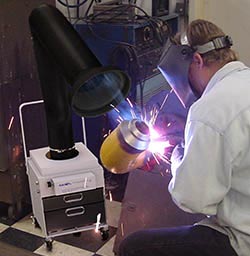 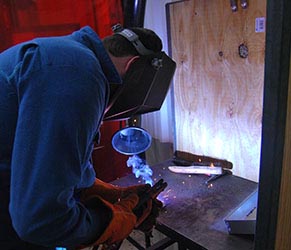 Welding fume extraction systems are an integral part of the hierarchy of controls for managing fume, and serve as the safety control from hazardous particles left behind in welding applications.

Welding fume hazards are a direct correlation of what can be inhaled through the welding process. Most of the hazardous substances are very fine, respirable particles of different types of metals, including:

Manganese containing fumes is one of the biggest risks encountered in welding smoke. Inhalation of the metal can cause serious damage to the brain and nervous system. Manganese fumes can result in the onset of Parkinson’s disease, a crippling disorder that affects movement and balance. It also causes “manganism,” which is closely related to Parkinson’s as it makes it difficult to move properly.

Iron oxide can also be contained in the welding fumes, which is very irritating to the respiratory system. There is also cadmium which is used to coat the metals, which can cause lung disease, emphysema, and kidney failure. Other harmful substances include lead oxides and asbestos.

Welding fume exposure can lead to a wide variety of negative health symptoms, which include, but are not limited to, harm or irritation to the lungs, heart, kidneys and nervous system. These health effects may be both short- and long term.

Metal fume fever is caused by inhaling certain metals during or after the process of welding, either as particulates or more commonly, fumes. Exposure of welding fumes typically form through the actual welding process, due to the heating of galvanized metals, alloys, and combustible compounds.

The signs of welding fume fever often relate to the flu, or resemble flu-like symptoms. Common ailments reported are having a fever, nausea, headaches (minor and severe), muscle aches, chest pain, and in some cases pneumonia (Flu-like symptoms normally disappear within 24 to 48 hours. Full recovery often requires one to three weeks). In the most severe cases of metal fume fever, patients reported a burning sensation in the body, lack of urine output, convulsive behaviour, high blood pressure, severe vomiting, and bloody diarrhea. If you or someone you know is experiencing these symptoms, please seek immediate medical attention or call 9-1-1 in case of an emergency.