Solvent fume extraction is a very distinct process that removes harmful fumes created from the evaporation of solvents after applicable use. Unfortunately, solvents evaporate very quickly, forming chemical fumes or vapors, which can easily be inhaled causing harmful side effects.

Workers in a wide variety of industries are exposed to solvents including:

Hazardous solvents evaporate swiftly into the air producing harmful solvent vapors. a lighter and more quickly evaporated compound creates a more hazardous solvent fume. Many industrial solvents contain a combination of chemicals resulting in a synergetic effect. There are a wide variety of solvents and some of the most hazardous and commonly used include: 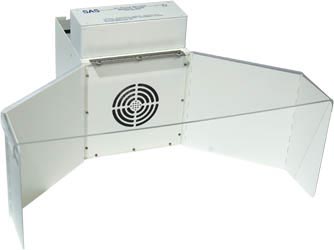 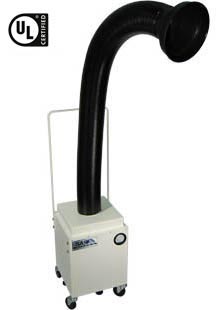 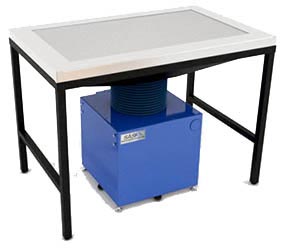 Epoxy fume extraction removes harmful epoxy fumes released into the air after the application and before curing of the epoxy. When epoxies evaporate, hazardous vapors emit causing health problems upon inhalation and skin contact. Epoxies are comprised of one or two components. One-component epoxies utilize a heating element with an epoxy resin, then cured using heat from an oven. Two-component epoxies mix together epoxy resins with curing agents containing hardeners and sometimes catalysts to speed the curing process. Two-component epoxies can cure at room temperature or at elevated temperatures. Two-component epoxies are more widely used due to the ease of curing. Epoxies have a wide variety of uses due to the ability to adhere to many surfaces, resistance to chemicals and mechanical wear, liquid tightness, and fast curing ability.

Common epoxies can be used for:

Yes, uncured epoxy is toxic, but once cured the epoxy is safe. Many epoxies contain solvent catalysts in the curing agents that can be highly toxic and corrosive. Two-component epoxies require the user to mix the epoxy resin with the curing agents involving a precise mix ratio to reduce health hazards. After mixing, the mixture contains a low catalyst concentration reducing the overall corrosive factor and toxicity.

Overall because of the wide variety of epoxies available, users should review the epoxy’s safety data sheets in order to determine the toxicity and associated health hazards.

Epoxy resin health hazards occur after inhalation or upon skin contact. Inhalation of epoxy fumes causes inflammation and irritation of the nose, throat, and lungs. An individual can become sensitized to epoxy exposure resulting in an allergic reaction upon additional exposure. Sensitization can occur at any time regardless of the concentration of exposure making exposure prevention vital at all times. Inhalation can also cause occupational asthma resulting in chest tightness, wheezing, and shortness of breath. Occupational asthma occurs when exposure to a workplace irritant causes or worsens asthma. According to Mayo Clinic, adhesive handlers and handlers or users of plastics and epoxy resins have a higher risk to develop occupational asthma than other occupations that do not handle epoxies.

Skin contact of epoxies may lead to allergic dermatitis causing irritated skin. The hardener component of epoxies can provoke hardener burns if skin contact occurs before mixing the epoxy. Hardener burns cause irritation, slight pain, and may discolor or scar the skin. Additionally, epoxy exposure has been shown to result in possible reproductive harm.