Plastic fumes can pose severe occupational hazards due to the wide variety of byproducts or additives released into the air during the manufacturing, processing, heat treatment, and burning of plastics.

To form plastics, industrial machinery uses heat or pressure to mold and shape plastics from granules, powders, or pellets of plastic resins. According to the EPA, plastic fumes mainly emit from the manufacturing equipment used to produce the final product including the extruder hopper, die head, sander, injection molding machine, and more. During these processes, the heating and melting of plastic resins cause chemical reactions exposing liquid solvents and additive fumes to the atmosphere. Likewise, plastic manufacturing such as injection molding machines, require purging to remove residual resins from the machine. This process involves high temperatures to melt the plastic and purging agents, thus, releasing smoke and plastic fumes. 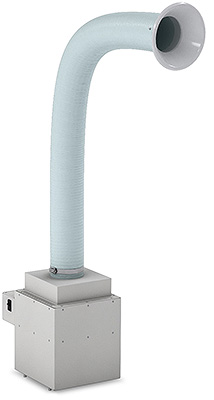 The Portable Floor Sentry fume extractor is a safety engineering control used for the capture and filtration of airborne contaminants. This source-capture fume extractor features heavy-duty casters for easy mobility, a flame-retardant and self-supportive flex arm, a small footprint, and high-quality filtration media. 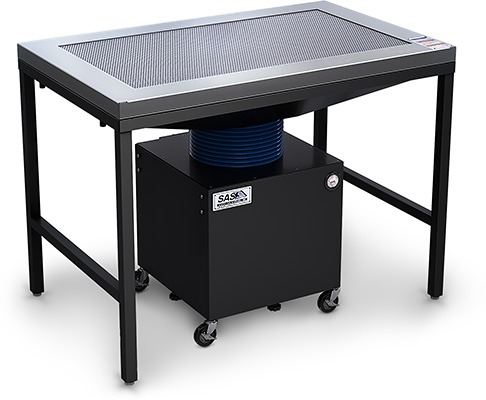 The Industrial Downdraft Table is a highly effective stainless steel source-capture solution for the extraction of fume, dust, and smoke at the work surface level. This safety engineering control helps to protect the operator’s breathing zone and surrounding environment from hazardous airborne contaminants by creating a negative-pressure and pulling respirable particles into the filtration system.

These negative-pressure systems are designed to eliminate costly exhaust systems, reduce energy losses, and aid in employee protection by capturing pollutants at the source of emission. By utilizing our 400 series fume extraction system, the air cleaner provides up to 700 CFM of air volume and is equipped with high-quality HEPA filtration media that is up to 99.97% efficient on particles 0.3 microns and larger. 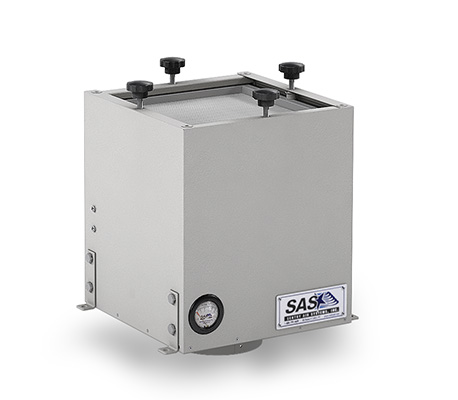 The Ambient Air Cleaner is a commercial-grade air filtration system that is highly effective at removing ambient pollutants without the need for external ducting, or make-up air. These low-maintenance filtration systems can be conveniently mounted in the desired ceiling location without taking any floor space, and in certain applications can be mounted on a stand. Typically used in locations where outside ventilation cannot suffice, ambient air cleaners are utilized to remove toxins, pollutants, and contaminants from the atmosphere.

To prevent health effects from the inhalation of plastic fumes, employers should monitor workplace air levels and implement engineering safety controls to prevent exposure. Employers must be familiar with the MSDS sheet for each material in use to know the best way to protect employees.

Many different types of plastic are manufactured for various uses throughout every industry. There are two main categories of plastics: thermoset and thermoplastic. Thermoset plastic has a rigid chemical structure and cannot be reshaped, melted, or changed after the initial molding. Thermoset plastics prove useful for automobile parts due to the mechanical properties, chemical resistance, stability, and durability. On the other hand, thermoplastics can be melted and reformed easily making them the most widely utilized type of plastic for the majority of plastic products and packaging. The most common types of plastic are:

Health concerns of plastic fumes can vary depending on the length of exposure, type of plastic, type of gas released, and the process. In general inhalation of plastic fumes can lead to an increased risk of heart disease, respiratory side effects such as aggravated asthma, skin irritations, headaches, nervous system damage, and other organ damage such as the kidney, liver, and reproductive system. The most common health symptoms from inhalation of plastic fumes are irritations to the nose, throat, and skin. Neurological symptoms such as dizziness and confusion can develop from exposure to styrene, butadiene, and acetone. Acrolein exposure from polypropylene can result in a decrease in pulmonary function. Phenol inhalation from ABS can damage the liver and kidney. Similarly, the Center for Disease Control and Prevention (CDC) and International Agency for Research on Cancer (IARC) classify butadiene and formaldehyde as a known human carcinogen that increases the risk of leukemia for butadiene exposure and nose and throat cancers for formaldehyde exposure. Lastly, hydrogen cyanide emitted from polyurethane is very toxic to humans leading to trouble breathing, suffocation, organ failure, and death.

Burning plastic waste contributes to environmental concerns. Not only does plastic fumes cause health symptoms to humans directly, but pollutants can also become deposited in land or bodies of water. Plastic fume pollutants persist for long periods and bio-accumulate in top predators. Wildlife can develop cancer, immune diseases, and reproductive problems. These issues affect the food chain through the presence of these chemicals in the food supply.

For the most part, if you accidentally inhaled burning plastic, you will not experience any lasting health effects. Helpful tips outlined below will help clear the area of plastic fumes to remove the odor and fumes to ensure respiratory safety.