Toluene, also known as methyl benzene, is an aromatic hydrocarbon that occurs naturally at low levels in crude oil and which is also produced as a byproduct in fuel production. Its electrophilic properties make it a useful feedstock in industrial processes such as the production of TNT and polyurethanes. It is also used as a feedstock to form benzene and xylenes. It is a common solvent and is used to dissolve paints, sealants, rubber, printing ink, and various other materials. It can also be used as an octane booster. Additionally, it is used in biochemistry experiments. When toluene is applied in these situations, its vapors or fumes can become an irritant to the user; therefore, an effective method of removing these fumes, such as a ductless fume hood, is necessary. However, because toluene vapors are both flammable and toxic and extended exposure can lead to problems in the liver, kidneys, blood system, or central nervous system, adequate controls must be used to prevent exposure. Sentry Air Systems offers a variety of ductless fume hoods (including custom hoods) and fume extractors to prevent prolonged exposure to various chemicals.

2) A total of 100 ml of toluene was measured into a beaker and placed under the SS-330-DCH. The sorbent tubes were placed in their respective locations in the laboratory (as stated above). The hood was placed in operation at 100 fpm and subsequently all the sampling pumps were switched on and their respective flow rates. The air volume rate of the pump inside the hood was set to 50ml/min. The three remaining pumps were set to 200 ml/min. The test commenced at the switching on of the sampling pumps and proceeded for 30 minutes, during which time the toluene evaporated from its beaker.

3) After the 30 minute sampling period, the sorbent tubes were removed from the sampling pumps, capped and labeled. The remaining toluene in the beaker was recorded to be about 85 ml and then recycled.

5) After the 30 minute time period, the sorbent tubes were removed from the sampling pumps, capped and labeled. The remaining toluene in the beaker was recorded to be about 95 ml and then recycled.

6) Once the two tests were completed, the samples were sent to an independent laboratory (HIH Laboratory) for results. 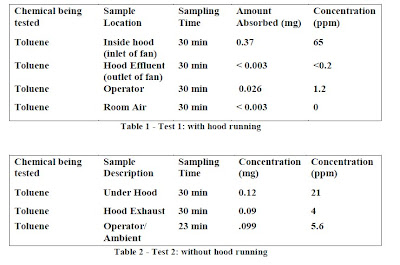 The results from the independent lab show that the concentration of toluene vapors in the airstream were reduced by more than 99% at the hood outlet and in the ambient air and by 98.2% at the operator’s breathing zone. These results contrast to a natural reduction neither fan nor filter present) in Toluene concentration of 81% at the hood outlet and a 73.3% at the operator’s breathing zone. The results from the control experiment show that the concentration of Toluene will build up quickly around the room and in particular at the operator’s breathing zone. Conversely, the results from the experiment show that the SS-330-DCH filter system basically eliminated any exposure that the operator had to the fumes during this 30 min period. The exposure level while the hood was running was at least 4.5 times less than what it was during the control experiment. Furthermore, had the test been significantly extended, it follows that because the concentrations were still building up in the room that the operator would have likely been exposed to much greater than 5.6 ppm of toluene vapor, whereas, the hood and filter would have prevented this exposure. Under the conditions present on the date of this test, the Sentry Air Systems ductless hood created a NIOSH compliant working environment for the operator and eliminated 99% of toluene vapors from the airstream.