Acetone, also known as propanone and dimethyl ketone, is the simplest example of ketone compounds and is also a very important building block in organic chemistry. It is produced and disposed of naturally in the body as a result of normal metabolic processes. The majority of acetone is produced from propylene in a propylene/benzene reaction. The resulting compound, cumene, is then oxidized to form acetone and phenol. There are other methods for producing acetone and they have proven useful, but have not been as cost effective.

Acetone is miscible with water and is therefore a popular cleaning solvent in both laboratory and industrial applications. It is also used as a nail polish removal, as a paint thinner, and as a sterilizer. Additionally, it is used as the volatile component in many paints and thinners. Because of its strong solvent properties however, care must be taken with its use as it can weaken and dissolve many plastic materials. Furthermore, because acetone vapors are both flammable and toxic and canirritate the skin, eyes, and respiratory tract, adequate controls must be used to prevent exposure. Acetone vapors also cause nervous system depression and can cause liver and kidney damage.Sentry Air Systems offers a variety of ductless fume hoods (including custom hoods) and fume extractors to prevent prolonged exposure to various chemicals such as acetone.

2) A total of 100 ml of acetone was measured into a metal pan and placed under the SS-330-DCH and the acetone evaporated for 1 minute before the sampling pumps were turned on. The hood was placed in operation at over 100 fpm and subsequently all the sampling pumps were switched on and their respective flow rates. The pumps ran for an additional 15 minutes while evaporation was taking place. The sorbent tubes were placed in their respective locations in the laboratory (as stated above). The air volume rate of the pump inside the hood was set to 50ml/min. The three remaining pumps were set to 200 ml/min. The test commenced at the switching on of the sampling pumps and proceeded for 30 minutes, during which time the acetone evaporated from its beaker.

4) Before starting the control test, the testing room was allowed to air out. The sampling pumps were then placed in their respective locations with fresh sorbent tubes. 100 mL of acetone was then placed in a pan under the SS-330-DCH and allowed to evaporate for 1 minute before the sampling pumps were switched on. Then, the pumps continued to run for an additional 15 minutes. Two measurements were taken: one at the breathing zone of the operator and the ambient air. The air was not filtered on this run.

5) After the 15 minute time period, the sorbent tubes were removed from the sampling pumps, capped and labeled. The samples were sent to an independent laboratory (HIH Laboratory) for results. 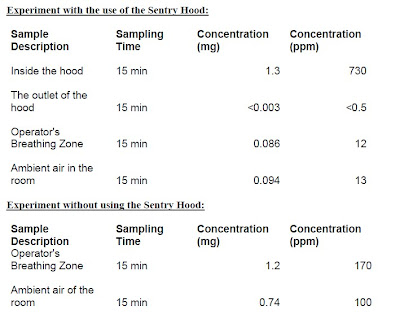