Methyl Ethyl Ketone, also known as MEK and butanone, is one of the most prevalent ketone compounds and is used in a wide variety of applications. It is primarily produced industrially on a large scale from 2-butanol.

MEK is a popular solvent and dissolves many materials. It is frequently used to dissolve gums, resins, cellulose acetate, nitrocellulose coatings and vinyl films. It is used to produce plastic and textiles, and it is also used in many cleaning products and in paint and varnish removers. It is used frequently as a volatile component in many spray adhesives and paints. Because of its strong solvent properties however, care must be taken with its use as it can weaken and dissolve many plastic materials. MEK is not terribly toxic but it and its vapors are very flammable. Additionally MEK carries a sharp and in some cases overpowering odor which can cause irritation. Because of its flammability and sharp odor, care must be taken to control its fumes.

Sentry Air Systems offers a variety of ductless fume hoods (including custom hoods) and fume extractors to prevent prolonged exposure to various chemicals such as MEK.

was used with SKC sampling pumps to test MEK.

2) A total of 40 ml of MEK was measured into a metal pan and placed under the SS-330-DCH and the MEK evaporated for 1 minute before the sampling pumps were turned on. The hood was placed in operation at over 100 fpm and subsequently all the sampling pumps were switched on and their respective flow rates. The pumps ran for an additional 15 minutes while evaporation was taking place. The sorbent tubes were placed in their respective locations in the laboratory (as stated above). The air volume rate of the pump inside the hood was set to 50ml/min. The three remaining pumps were set to 200 ml/min. The test commenced at the switching on of the sampling pumps and proceeded for 30 minutes, during which time the MEK evaporated from its beaker.

4) Before starting the control test, the testing room was allowed to air out. The sampling pumps were then placed in their respective locations with fresh sorbent tubes. 40 mL of fresh MEK was then placed in a pan in the room without the fume hood running. After pouring the MEK into the pan, evaporation took place for 1 minute before turning on the sampling pumps. Then, the pumps continued to run for an additional 15 minutes. Two measurements were taken: one at the breathing zone of the operator and the ambient air.

5) After the 15 minute time period, the sorbent tubes were removed from the sampling pumps, capped and labeled. The samples were sent to an independent laboratory for results.

The sorbent tubes were analyzed by a 3rd party lab and the results were reported in the following table: 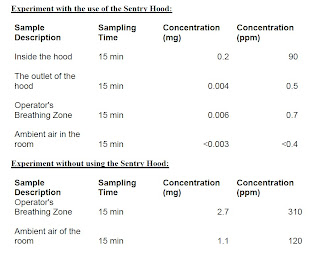 The results from the independent lab show that the concentration of MEK vapors in the airstream were reduced by more than 99% at the hood outlet and in the ambient air and by over 98% at the operator’s breathing zone. These results contrast significantly with the MEK concentration in the room when no filter system is used. In fact, the results from the control experiment show that the concentration of MEK will build up quickly around the room and in particular at the operator’s breathing zone. Conversely, the results from the experiment show that the SS-330-DCH filter system basically eliminated any exposure that the operator had to the fumes during this 30 min period. Had the test been extended, it follows that the operator would have likely been exposed greater than the OSHA mandated TWA exposure limit for MEK, whereas, the hood and filter would have prevented this exposure. Under the conditions present on the date of this test, the Sentry Air Systems ductless hood created a safe working environment similar to what NIOSH requires for the operator and eliminated 98% of MEK vapors from the airstream.