Sentry Air Systems, Inc. manufactures equipment designed to capture organic solvent vapors and/or other air contaminants and, after removal, return the cleaned air to the local environment. The equipment consists of an electric motor-driven fan mounted on the top of a ductless hood that draws contaminated air through a filter or canister containing the adsorption media (such as activated carbon) and exhausts the air into the room. The filter media typically consists of a HEPA (high-efficiency particulate) filter or activated charcoal or some other adsorbent. This particular study was designed to evaluate the effectiveness of the Sentry Air Systems ductless hood extractor (Model SS-340 DCH) when employed to collect the vapors emitted when parts are cleaned using isopropyl alcohol solvent (“IPA”). The specific purpose of the study was to evaluate the efficiency of the ductless hood in capturing and removing IPA vapors from the ambient air and, especially, from the breathing zone of the operator.

The ductless hood used in this study had the capability of drawing up to 300 cfm of air and passing it through a canister of activated charcoal. IPA is a common organic solvent that is water soluble and of relatively low toxicity. The PEL (permissible exposure limit) established by OSHA for IPA is 400 ppm as an 8-hour time weighted average (TWA), and 500 ppm as a STEL (short-term exposure limit). A STEL is normally considered to be a 15-minute average concentration. A material safety data sheet (MSDS) for IPA is attached to this report. Metal parts were placed in an aluminum pan (12 x 18 x 2 inches) and covered with 90% isopropyl alcohol (IPA). The parts were cleaned using a small brush. The operator wore Neoprene© gloves and an organic vapor, air purifying respirator. The parts were cleaned for a 30-minute period without the machine running. An air sample was collected in the breathing zone of the operator and another sample was collected of the ambient air about 2 feet away from the operator. After the 30-minute period, the sample collection media (charcoal tubes) were replaced with two new ones and two additional samples were collected, one at the inlet of the charcoal canister inside the hood and the other in the exhaust. The cleaning operation was repeated for 30 minutes and the machine was operated at a flow rate of 300 cfm. The air samples were collected using battery-powered pumps calibrated to pull approximately 300-400 cc/min. of air through the charcoal collection media.

Six charcoal tubes, plus a blank, were analyzed by an AIHA certified laboratory for isopropyl alcohol. The collection data are presented in the following table: 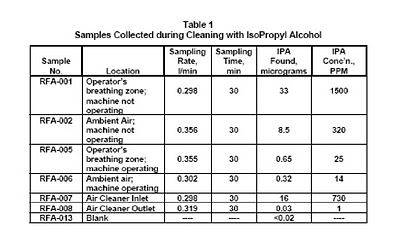 As can be seen from the table above, there was a 95.6% reduction in the concentration of IPA in the ambient air near the operator with and without the machine running. Likewise, the potential exposure of the operator was reduced by 98.3% by the Sentry Air Systems ductless hood extractor. The comparison of the inlet and outlet samples taken on the Sentry ductless hood extractor during the cleaning operation documented a reduction in solvent vapor concentrations of 99.9%.

Typically, solvent cleaning operations are done in a closed vessel where solvent vapor creation is minimized and released vapors are vented to the outside via ducts. When solvents are handled in areas where venting of vapors to the outside is not possible or practical, ductless hoods may provide an effective solution. The study presented herein shows that the Sentry Ductless Hood performed in an excellent manner to control vapors from a cleaning operation using isopropyl alcohol.

Isopropyl alcohol is commonly called “rubbing alcohol” and limited exposure to skin and the respiratory system is not harmful (such as during physical massage). However, OSHA has established an IPA exposure limit of 400 ppm (8-hrs.) and 500 ppm (15 minutes), so when exposure potentials reach these levels, the exposure must be controlled or eliminated. The Sentry Ductless Hood can play an important role in implementing such controls.

If you have any questions or comments regarding this report, please contact me at 713-983-7910 or by e-mail at BobCIH@aol.com.

For a PDF version of this report, click here.
For consultation on solutions for the control of Isopropyl Alcohol fumes, call a Sentry Air Sales Representative at 1.800.799.4609, email us at sales@sentryair.com, or request a quotation or further information here.