Sentry Air Systems has provided fume extraction equipment to employers and workers in the soldering industry since the 1990s. The fumes associated with solder and rosin-based flux have potentially harmful side effects (including asthma-like symptoms and sensitization effects) [3] for the operator and others in close proximity. Over the years, we have received numerous calls from consumers who have purchased benchtop fume extractors or smoke absorbers (usually under $100) from other companies but are looking for a different solution because they still seem to be experiencing the irritating and ill effects of inhaling solder fume. 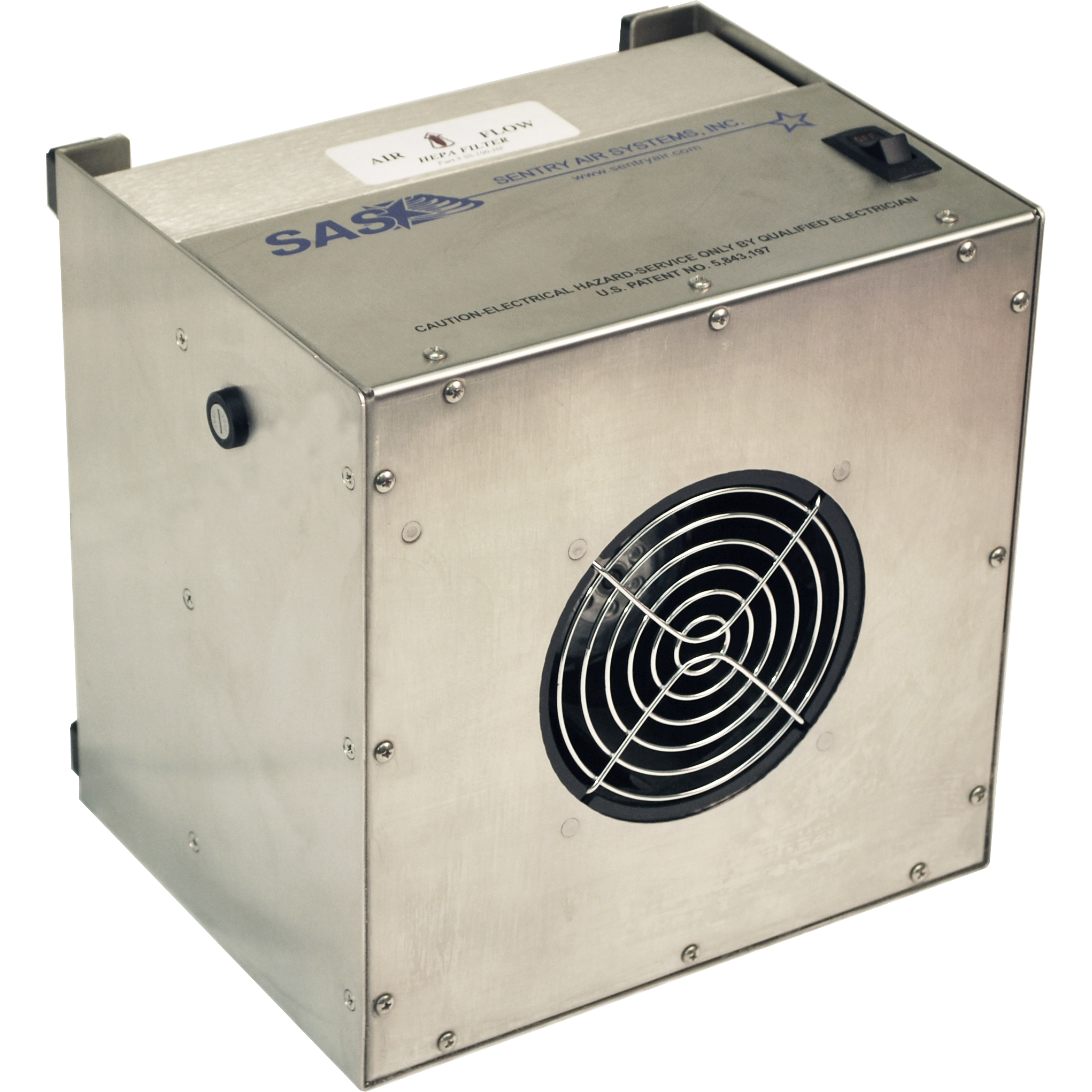 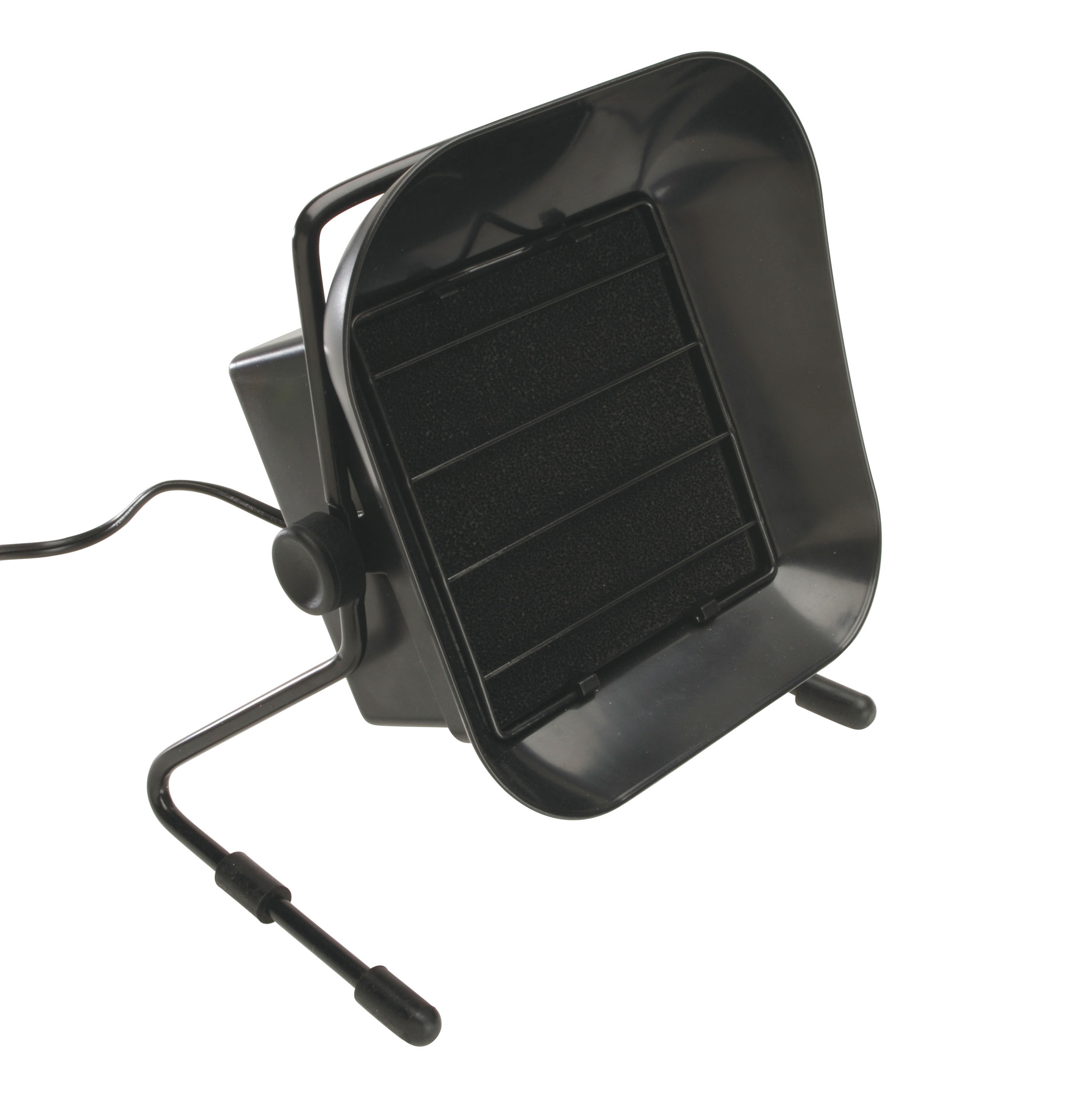 Recently, our research team decided to perform the same efficiency test on our benchtop unit [The Stainless Steel Solder Sentry] and a competitor’s benchtop unit to determine the difference in product efficiency in the attempt to uncover why consumers were still feeling the effects of inhaling solder smoke while using competitor’s extraction products. After some Internet research, we chose the Weller Smoke Absorber (this unit was also used by some of the consumer’s who called Sentry Air). The product information from Weller Tools describes unit where “fumes are absorbed by the replaceable carbon-activated filter”.

Test results conducted by third party ‘Adams & Associates’ (samples were also sent to a third-party laboratory for analysis) showed a 95.3%* removal of particulate by the Solder Sentry and only an 11.1% removal of particulate by the Weller Smoke Absorber. Please read the sections below for further details. These sections are taken directly from the Industrial Hygiene Report that explains the process and results of the test.

*Sentry Air Systems HEPA filter is 99.97% efficient on particles .3 microns and larger. Several variables may have affected this actual result (95.3%), including ambient air quality and the running of the air conditioner.

Soldering operations are commonly used in the electronics industry to secure electronic parts to printed circuit boards. Typically, the parts are brought into contact with heated solder and flux at temperatures sufficient to melt the solder and make a satisfactory joint. At temperatures of about 500 degrees F or higher, emissions from the flux, solder, and circuit board are produced that are irritating and potentially harmful to the operator and others in the vicinity. It is highly desirable to capture these emissions and prevent them from contaminating the workplace air.

The purpose of this project was to compare the efficiency of the Sentry Air Systems SS Solder Sentry™ and the Weller Smoke Absorber™ in collecting and removing emissions evolved during typical soldering operations.

Lead-free solder is commonly used in the electronics industry. A typical solder employed in the industry (and which was used in this project) is Lenox WS 15030, 0.062” or 1.5mm diameter solder with rosin core. According to the Material Safety Data Sheet [1] (MSDS), this solder is composed of 97% tin and 3% copper by weight with a rosin core. When rosin core solder is heated above 200 degrees C, it emits a fume containing a mixture of finely dispersed particulate matter and gas/vapor. Initial tests showed that the fume did not contain copper, tin or detectible aldehydes (as formaldehyde). The specific products that are believed to be responsible for adverse health effects (asthma-like symptoms and sensitization effects) are primarily attributed to particulates that can be caught on a membrane filter and analyzed by gas chromatography. This concept and sampling method were published in “Workplace Exposure to Rosin-based Solder Flux Fume During Hand Soldering”, by I. Pengelly, et. al. [Ann.Occup. Hyg., Vol. 42, No. 5, pp. 295-302, (1998), © 1998 British Occupational Hygiene Society]. These potentially harmful particulates were present in this test; therefore, we directed our attention to filter efficiency (inlet vs. outlet) regarding the capture and removal of airborne particulate matter generated during soldering. In the work reported herein, only the weight of the particulates collected on PVC filters was measured and reported.

The SS Solder Sentry™ unit was modified by attaching a 10-inch extension of 8” diameter duct to the inlet and outlet in order to allow the fume from the soldering operation to better mix before sampling. A small hole was made in each duct to permit the insertion of a short piece of ¼” Tygon tubing to deliver the air sample to a pre-weighed PVC sampling cassette. The soldering iron was operated at 700 degrees F and a total of 0.7 oz. of solder was used during the 16 minute sampling period. Air samples were collected from the inlet and outlet of the SS Solder Sentry™, using battery-powered sampling pumps calibrated to draw a flow rate of approximately 2 liters/minute. Measurements of airborne particulates were also made in the room during the soldering operation using a Particle Scan Pro™.

When the sampling was completed, the soldering operation was repeated using as nearly identical conditions as before, and substituting the Weller Smoke Absorber™ for the SS Solder Sentry™ machine. Similar modifications were made to the Weller machine to facilitate fume capture and mixing, as well as ease of air sample collection. Again, soldering was conducted using 0.7 oz. of Lenox (Lead-free), WS 15030, 0.062” or 1.5mm diameter solder with rosin core during a 16 minute period.

The concentration of ambient airborne particles in the room was monitored while the soldering operations were being conducted, using the Particle Scan Pro™. The results are shown in Table II.

*This value was considered to be an anomaly since it was taken at the end of the sampling when soldering had been completed and the circuit board was moved closer the Particle Scan Pro™.

1. The Sentry Air Systems “SS Solder Sentry™” unit did an excellent job of removing fume and other particles generated during soldering operations. The HEPA (high efficiency particulate) filter that is featured in the “SS Solder Sentry™” unit is designed to remove particles as small as 0.3 microns in diameter. The room air was free of noticeable odor and irritants from the soldering.

2. The Weller “Smoke Absorber™” unit did a poor job of removing particles generated by soldering operations as evidenced by the sampling results and the presence of objectionable levels of odor and eye and throat irritants in the room air.

1. MSDS (Material Safety Data Sheet) for the solder used in this project can be found at: http://complyplus.grainger.com/grainger/msds.asp?sheetid=2986303

2. A recommended method of handling data values which are log-normal in nature and which are below the limit of detection is to use the number obtained by dividing the “less than” value by the square root of 2. For discussion of this subject see “Estimation of Average Concentration in the Presence of Nondetectable Values”, [Richard W. Hornung and Laurence D. Reed, Appl. Occup. Environ. Hyg. 5(1), January 1990, pp. 46-51].

Contact us today to protect yourself from soldering fumes!