When working with organic solvents, laboratory professionals should utilize engineering controls such as fume hoods and fume extractors to help protect themselves from hazardous exposure. Depending on the solvent, health side effects from exposure can result in life-long harm or conditions. According to the Occupational Safety & Health Administration (OSHA), the

What is a Solvent? 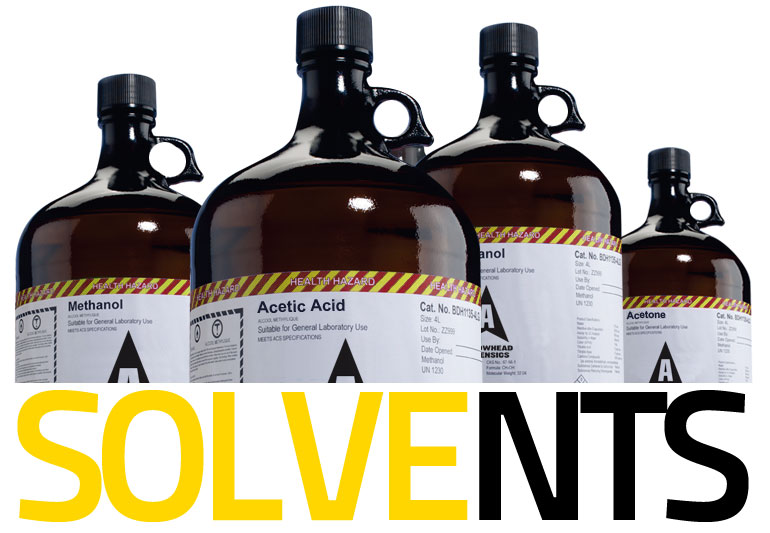 A solvent is any substance (solid, liquid, or gas) that can dissolve another solid, liquid, or gas (called a solute) to form a solution. The solvent and solute have chemical reactions that link them together based on their respective chemical properties and cannot be separated by means of mechanical filtration. When referenced in industrial applications, a solvent is usually a liquid called an Organic Solvent. Organic solvents are carbon-based and used to dissolve (“attack”) solids, liquids, and gases.

There are many strong organic solvents that will dissolve solid materials, including unwanted residues, making them useful in a variety of applications such as:

It should be noted that care should be taken when using and storing these solvents because of their strong dissolving properties. Some plastic storage bins can and will be attacked and disintegrated by many organic solvents. 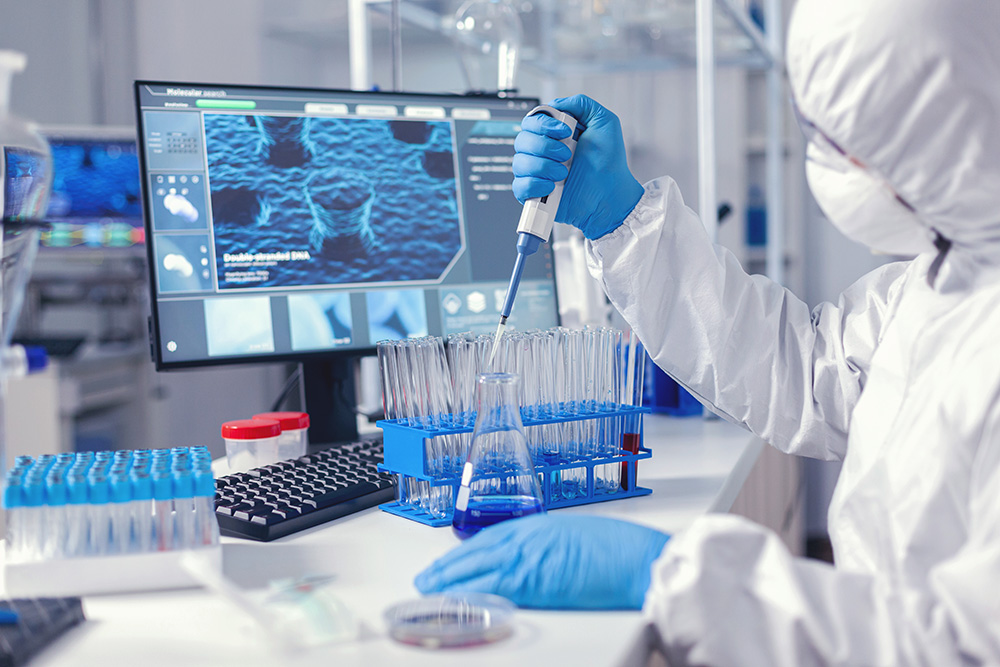 Lab attendant using PPE to protect themselves from solvent use hazards.

The most important thing to remember about organic solvent safety is flammability. Consequently, great care should be taken during storage and handling of organic solvents, especially large quantities of organic solvents. Storage drums should be well grounded to prevent any spark from igniting the liquid, electrical devices used in areas of high usage should be intrinsically safe, and there should be absolutely no smoking around these chemicals. When “hot work” needs to be done in an area of high solvent use, permits must be obtained and the area must be cleared of all solvents and ventilated before work can begin. Furthermore, there should be engineering controls in place to ventilate storage areas and places of high usage in case of spills that would produce extremely flammable mixtures in the air.

• Don’t wash your hands with the solvent.
• Use proper personal protection equipment (PPE) when working with solvents. This will keep solvents off your skin and clothes- if clothes do get wet with solvent; change clothes right away.
• Use the minimal amount of solvent necessary for your application.
• Cover or seal solvent-filled containers when they are not in use. Also contain solvent-soaked items, like used rags.
• Keep areas properly ventilated: make sure fans and exhaust systems are turned on when solvents are used.
• Storage- Always label organic solvent containers.
• Never enter a confined space with the proper PPE and respiratory equipment that are (or could potentially be) contaminated with solvents.
• Label and store solvent waste appropriately [Ref 2]. 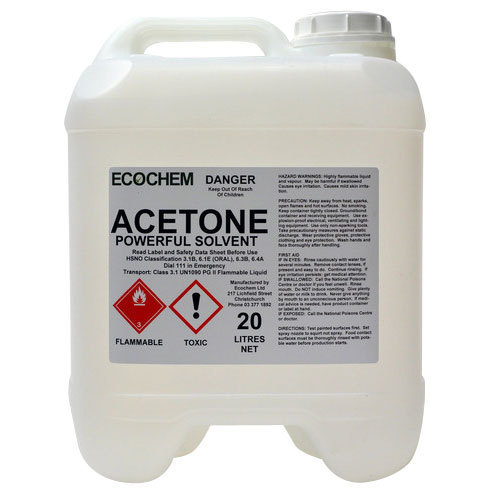 A bottle of Acetone, a commonly used solvent.

Inhalation of solvent vapors and mists can lead to overexposure of solvents. Vapors form as solvents evaporate. Additionally, the mist can be inhaled during solvent spraying applications. When these mist and vapors are inhaled, they are absorbed into the bloodstream through the lungs.

The Material Safety Data Sheets (MSDS) of solvents should always be referenced prior to handling and using the chemical. The MSDS provides vital information to let the user known the severity of possible side effects of exposure in order to take the proper safety precautions. For example, let’s look at Acetone’s MSDS:

Acetone is a commonly used solvent. Under “Potential Health Effects” by Inhalation, the MSDS notes that

Although chemical composition varies from solvent to solvent, it is important to consider respiratory safety engineering controls for all solvent use.

What to Consider When Choosing a Ventilation System

Regarding ventilation as a safety engineering control, HESIS explains that “fans are most effective when they remove vapors at the source, by pulling the air away from the work.” For instance, a fan or fume extraction device that is placed at the opposite end of the room from the chemical and operator will do very little to prevent the operator from inhaling fumes, especially if it is a large quantity. As an additional example, placing an overhead hood over an operator working with solvents would do little to minimize his/her exposure as the air would be pulled right through the breathing zone.

Source-capture fume extractors (or local exhaust ventilation) come in a variety of configurations. Depending on a variety of factors, one model may work better for one person over another. There are several variables that should be considered when choosing an appropriate ventilation system for your operation.

The amount of solvent that is being used is one of the most important factors in deciding on a ventilation system. For instance, for someone that utilizes large amounts of solvent, an Exterior – Ducting Exhaust Hood may be used. Most organic vapor filter cartridges only absorb a fraction of their weight, so a 10lb filter could absorb at most 4 lbs of vapor. For high use applications, this amount of vapor could be reached after a day’s use. Consequently, using a ducted exhaust hood where the vapors could be vented to either a large scrubber, incinerator, or the outside would be optimal. 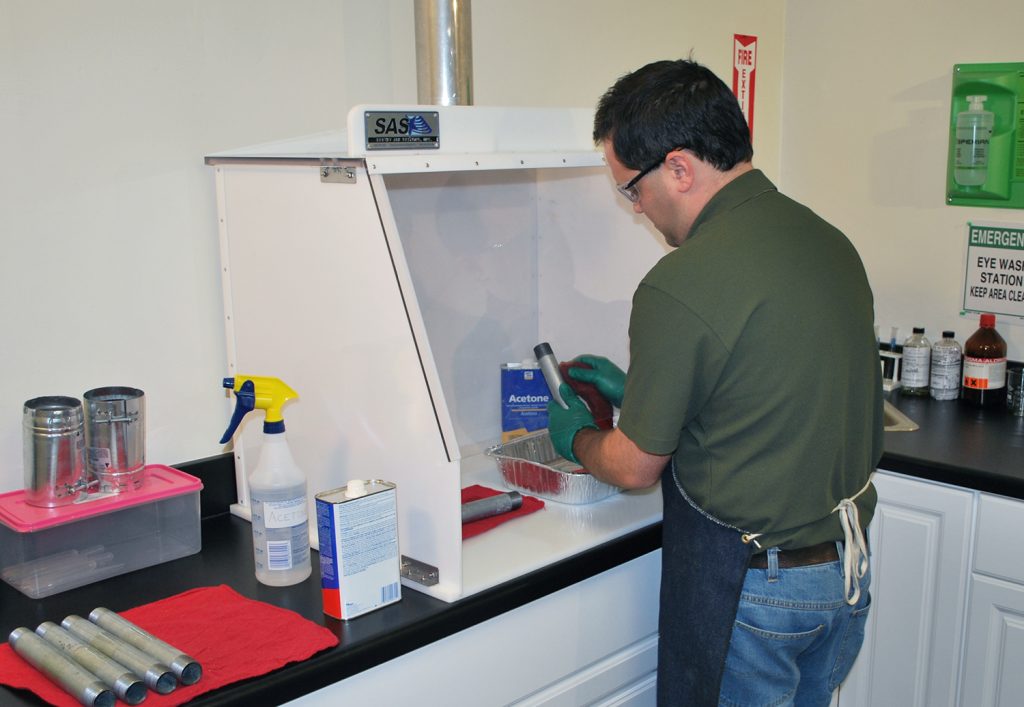 Small amounts of solvent may require less air volume to remove. For those that use smaller amounts of solvent, ventilation options like the Winged Sentry with Lid. This benchtop unit has infinitely adjustable side “wing flaps” for operator control. Also a Portable Floor Sentry sits on the floor nearby and collecting fumes with a self-supportive flex hose. These two units are equipped with activated carbon filtration to remove chemical fumes. 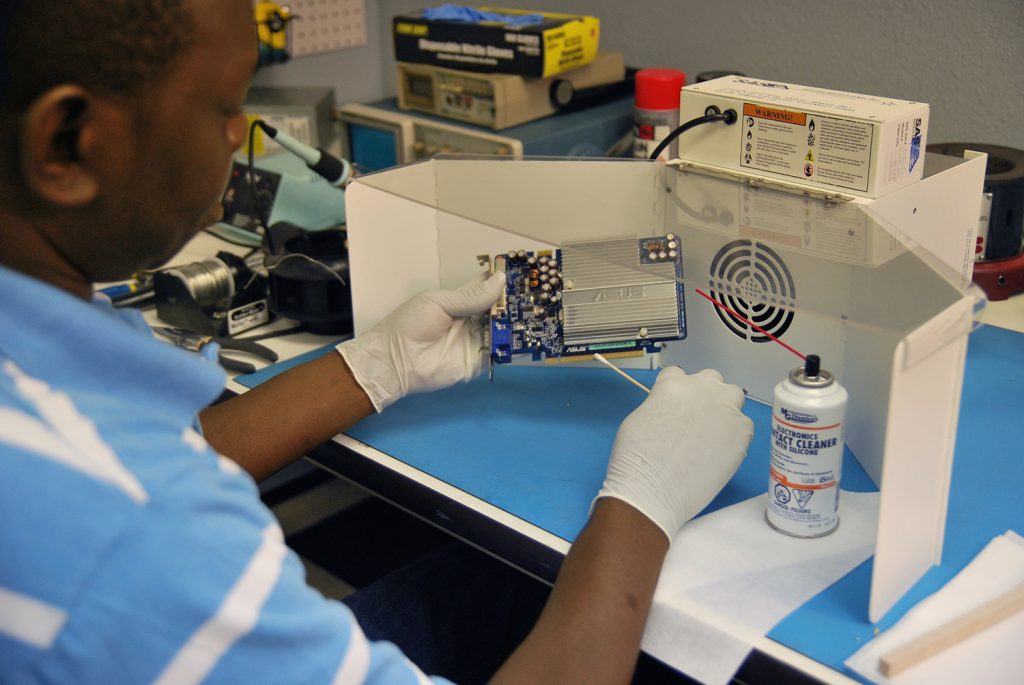 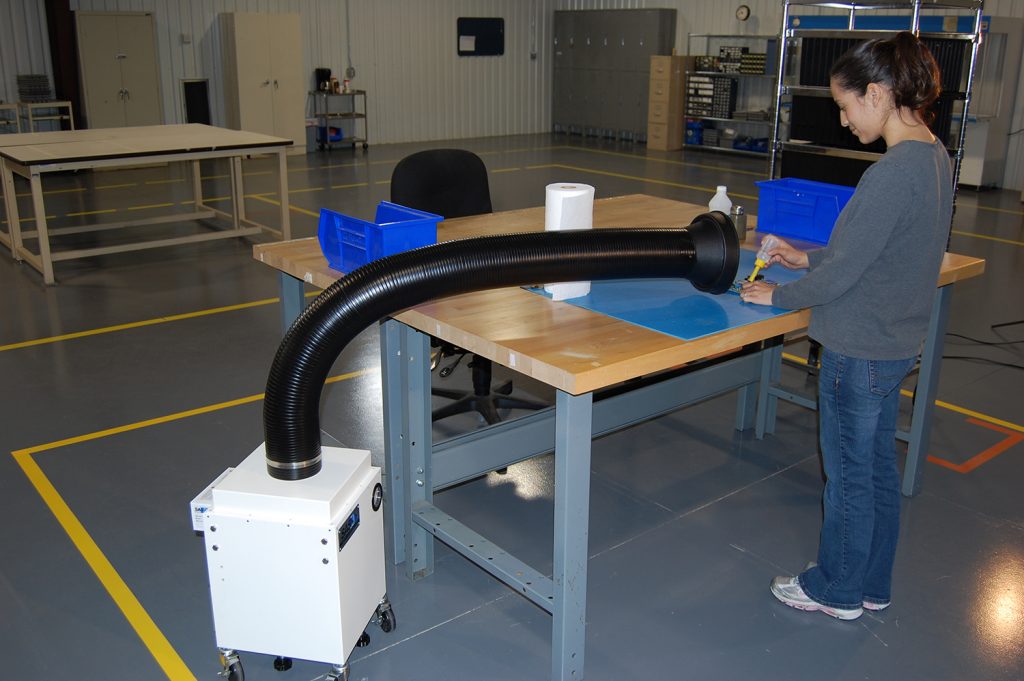 Equally as important as the quantity of the solvent is the type of solvent. Since we are discussing organic solvents then an organic vapor cartridge (such as activated carbon) would nearly always be appropriate. The exceptions are very light molecular weight solvents such as methylene chloride, methanol, formaldehyde, ethyl ether, and even ethanol to an extent. Whereas treated organic vapor filters exist for formaldehyde and other light aldehydes, none such specialized filters exist for other light solvents. Therefore, ductless hoods (with filtration media) would not be appropriate for these types of solvents.

A Certified Industrial Hygienist or Safety Engineer should be consulted when developing a ventilation system for solvent control.

For information on individual products that can be used for these systems (including the ones mentioned above), please call Sentry Air Systems at 1.800.799.4609, email us at sales@sentryair.com, or fill out this form to receive more information.