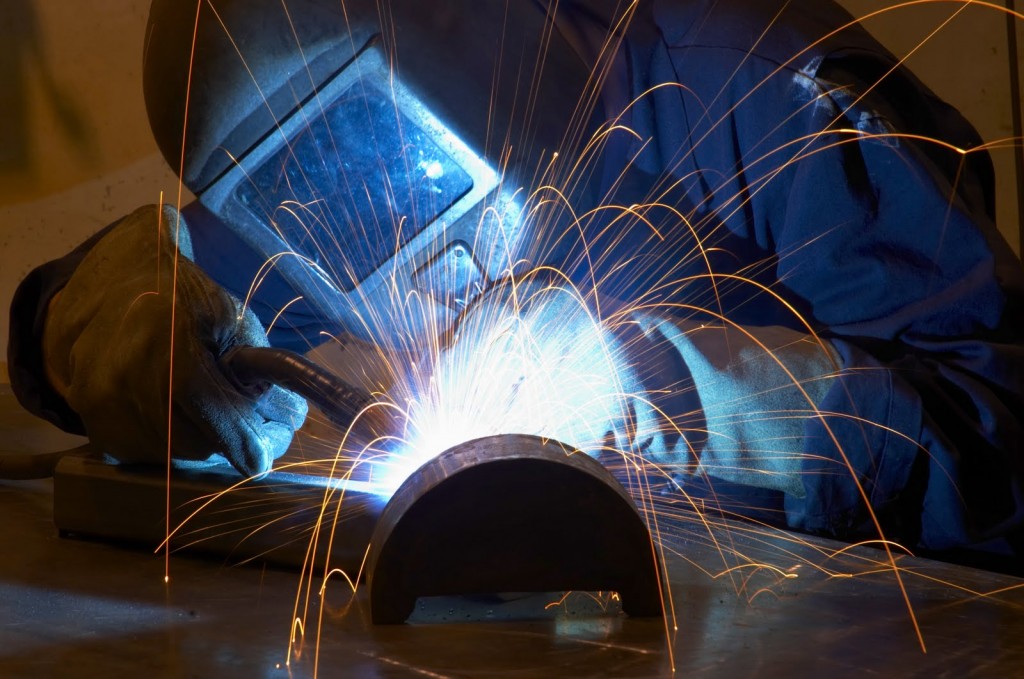 Welder’s ague, zinc shakes, Monday fever, brass founders’ ague, and smelter chills are just a few of the names that metal fume fever has been referred to over the years [it was first documented in the mid-1800s]. [1]

This occupational illness is typically seen in workers that weld, cut or heat metal materials; specifically zinc. When zinc-coated metal [i.e. galvanized steel] is heated up, it can release zinc oxide fumes, which can be inhaled by the welder if respiratory precautions are not taken. Although zinc is cited most frequently in conjunction with this illness, there are other metals that have been documented as inducing metal fume fever symptoms [ex. copper, manganese, chromium, arsenic, magnesium, nickel, titanium, boron]. [1]
The graph below, from the Metal Fume Fever: A Review of the Literature and Cases Reported to the Louisiana Poison Control Center, shows (A) the most commonly reported occupation and (B) Medical Treatment sought for 26 cases of metal fume fever over a two year period reported to the Louisiana Poison Control Center. [1]

What are the symptoms?

Symptoms of metal fume fever generally mimic flu-like symptoms. They are cited as occurring within approximately 3-10 hours after inhaling fumes. A report published by The Journal of the Louisiana State Medical Society cites the following symptoms:

The Occupational Safety & Health Administration cites similar symptoms:
“Symptoms of metal fume fever are very similar to those of common influenza. They include fever (rarely exceeding 102° F), chills, nausea, dryness of the throat, couch, fatigue, and general weakness and aching of the head and body. The victim may sweat profusely for a few hours, after which the body temperature begins to return to normal.” [2]
Because these systems are very generic and could be easily mistaken for a variety of other illnesses, it is important to discuss your occupational history with your physician.
The figure below, from the Metal Fume Fever: A Review of the Literature and Cases Reported to the Louisiana Poison Control Center, graphs the most commonly reported symptoms in a survey of individuals who developed metal fume fever after a workplace exposure [March 2004- March 2006]. 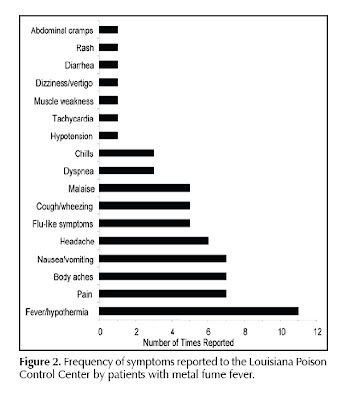 How long do symptoms last?

Symptoms should resolve within 24-48 hours, while it may take another one or two days to recover from a short-term tolerance to zinc fumes. Overall, four days is cited as the time frame in which one should fully recover. [1]
The long-term health effects of repeated bouts of metal fume fever and zinc oxide fume exposure are inconclusive. Some medical professionals theorize that repeated exposure may later develop into Occupational Asthma; however, this has not been proved. Others suggest that metal fume fever presents “reversible respiratory symptom[s]”, which do not result in long-term lung damage. [1]
What specifically causes metal fume fever?
The specific cause of metal fume fever is also not fully understood; however, a cytokine-mediated immune response is thought to be involved. Collective data shows an increase in levels of certain cytokines in the lungs of exposed individuals that are most likely the result of stimulation of pulmonary macrophages by the metal fume. [1]
Treatment
A report published by The Journal of the Louisiana State Medical Society describes the following as treatment of metal fume fever:
“Treatment of mild MFF consists of bed rest and symptomatic therapy (eg, analgesics, oxygen therapy, and antipyretics) as indicated. Corticosteroids have not been shown to be of any benefit.”

*If you believe that you have been overexposed to zinc oxide fumes; seek the help of a medical professional.

*** This blog entry was written as a customer service and no representation is made as to the completeness or accuracy of the information it contains. Persons that believe they have been overexposed to zinc oxide fumes should consult a healthcare physician or seek medical assistance. If you believe you are being exposed to these fumes in your workplace, consult a industrial safety officer or management team regarding this issue.